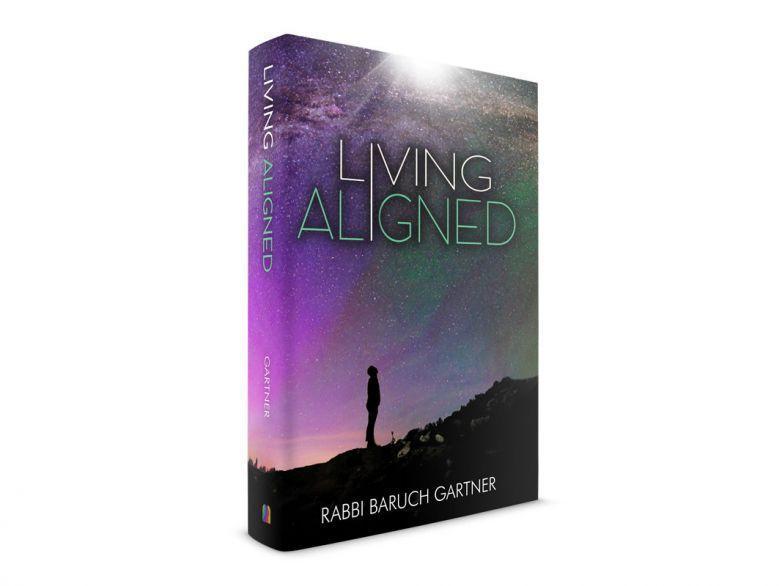 Experience the writing of Rabbi Gartner first hand in his essential new work "Living Aligned." (from intro of “Living Aligned”)

A major renaissance in Rabbi Gartner’s life accrued during the autumn of 2012. After the Jewish high holidays, we begin the Torah-reading cycle over again, starting with the account of creation and the story of Adam and Eve. No matter how many times I learn it through (and I’ve learned it countless times), that narrative always makes me think about life at a deeper level. Every year—every year!—my curiosity about certain basic questions wakes up all over again.

So I went back to the beginning, and as the weeks went by I was filled with questions that weren’t new, but I was experiencing them in a new way.

What is man’s role in Creation? Why did there have to be a flood? What was unique about Noah? And then, one day, I got stuck on the image of the raven.

Yes, the raven. The biblical bird in Noah’s ark. The first bird sent out to seek dry land, but which went “to and fro” until another bird, a dove, was chosen for the mission in its place. That image of the raven, flapping its wings and vacillating, instead of flying off to carry out its task—stuck in a useless cycle—struck me.

I thought about all the ways that people get caught up in negative cycles, caught up in rigid thinking and self-defeating behaviors. I realized that if I looked deeper, the raven would provide important lessons.

I delved into the words of the sages—you’d be surprised how much the ancient texts have to say about one bird! I explored mystical texts that were already familiar, but that now opened up for me in a new way.

And I found my way back to a teaching of Rebbe Nachman of Breslov, one of the great Chassidic masters.

It was a teaching about the raven—about raven-states of mind. It was a teaching I’d shared countless times with students over the years, but now somehow it was different. It was deeper. I was feeling it, not just learning it. Something had changed.

At the same time that my thoughts were in motion about the raven, I met Sam—the son of a friend of mine—while I was vising the States. He was in terrible shape—depressed, apathetic, and tortured by thoughts about traumatic events in his past. I literally pulled him out of bed and brought him back to Israel with me, holding his hand on the plane.

Sam was so grateful I’d connected with him, that I felt compassion for him. Finally, someone cared enough to step into his suffering to help him out of it.

For years, Sam had spent the better part of his day in bed; now, freshly arrived in Israel, he was getting up early to meet me where I go to pray in the mornings. We’d sit down afterward and have a cup of coffee together, and he started to share his feelings with me. He’d really despaired of ever being free of his negative thoughts. He was convinced he had no hope of real and lasting change.

Sam was such a prisoner of his past, so locked into his negative thinking that he would repeat his story over and over again to anyone who would listen.

I wanted so badly to help him.

Now, it’s not as though I’d never worked with students before, trying to help them find their way emotionally and spiritually. Years ago, I opened a center for Torah study—a yeshivah—to help young men just like Sam. The center’s uniqueness lay in it being not only a space for serious Torah study, but an accelerator for personal growth.

At a certain point, however, sustaining and maintaining the center started to outweigh my focus on the students. The cause had become more important than those it was designed to serve. My intentions were right, but in meeting the daily demands of running an institution, I’d stopped being present in the moment with the students. Eventually, the center closed.

Now, my reconnection with Sam was operating on a different level.

I wasn’t the director of any institution; I was just listening and paying close attention to the way his mind worked.

It was an education for me. It made me an expert in what I like to call “constricted consciousness”—tight and unproductive modes of thinking. By just being present and observing without judgment the trend of his thoughts, I learned a lot about how certain mental habits sabotage life and health.

And then I got an education about myself, as well. Was I really so different from Sam? Sure I was healthier and fully functional, but didn’t I also succumb to his way of thinking and feeling, even if to a lesser degree?

Weren’t we both sometimes like that raven in the ark, batting back and forth, unable to let go and set out on his mission?

Again, I was flooded with compassion for Sam. I started to search within and without, through every teaching I found, for tools to help him.

And then things finally began to change.

I’m sure the channels opened up because I wanted so badly to help Sam. A fresh, very relevant Torah awoke within me, and I started to share it with him and then with others. I began to live it myself. The more I spoke about it with students and friends, the deeper it took root within me. More powerful insights revealed themselves all the time, and they shed new light on so much I’d already learned, clarifying it in an absolutely new way; it seemed that all the understanding I’d acquired before just paled in comparison.

That is the essence of this book. It’s where it began, and this is its purpose.

We only achieve true growth and change by letting go of the self.

We do it by connecting with others, by opening up our wellsprings of compassion and reaching out.

The desire to connect with another arouses compassion.

Together, they bring growth, unity, and inner peace.

So in a way I owe everything to my dear friend, Sam. I’ve told him many times just how his eyes called out to me for love and connection when I was on that trip to the States. I’m so grateful to him for waking me up to a new life. And as I’ve continued this journey of discovery and change, I’ve been blessed with many teachers, students, and friends, who have opened new gateways of perception and insight.

May you discover inspiration within these pages, and may these ideas free you from your locked places. My hope and prayer is that these words will shine a new light on the cosmic path of truth and unity. This book is an ark that can lift us out of the flood of disconnection that rises around us. Together, we can build a new world of clarity, unity and compassion.